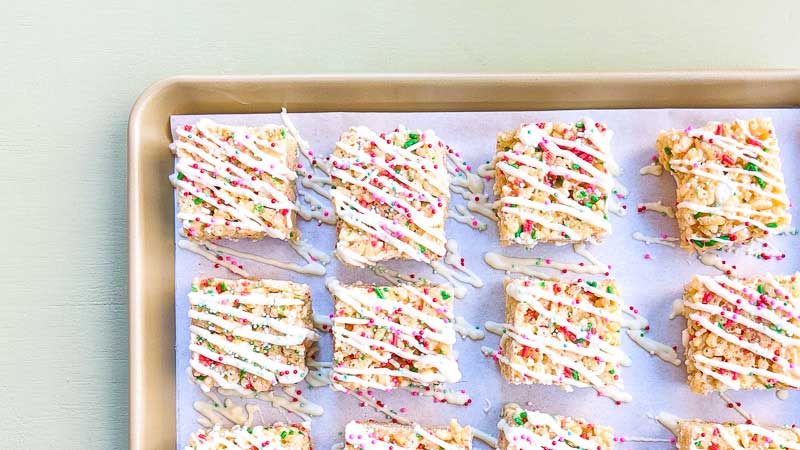 Have you ever wondered why the boxed kind of Rice Krispies Treats are so good? Like, even better than the kind you make in your home kitchen? To me, the boxed kind has this underlying perfectly buttery flavor that is just… chef’s kiss.

Now, you’d think the recipe shared on their official Rice Kripies box would give you that same perfect dessert. You know the recipe. It’s literally called the “Original Rice Krispies Treat” recipe. It goes like this: melt butter, add marshmallows, add Rice Krispies. BOOM. Done. Easy. But not nearly as good as the packaged version.

And yessss, before you say it…. I knowwwwww. The packaged one is different than the original recipe because there are added preservatives (and other weird things) to extend shelf life. And if you take a quick look at the package you’ll also see other fun things. Like corn syrup! And fructose! And vegetable oil! And something called DATEM and… a rabbit hole for a different day.

Instead, let’s celebrate because I have a recipe that is BETTER than the packaged version of Rice Krispies Treats. And BONUS! It doesn’t contain any of the added chemicals! Whoohoo!

In true HippoPops fashion, I have provided more than enough details to walk you through every step of this recipe. So, first up– a table of contents!

This recipe for the best ever Rice Krispie Treats is years in the making. I have tested so many recipes and for a while thought I found a winner. But then I realized it was 1) still missing the sweet butter flavor and 2) was missing the bigger chunks of marshmallow throughout. You know, where there is not only melted marshmallow that holds the treat together, but additional mini marshmallows that have held their shape. THE BEST. Actually, the latest boxed version of Rice Krispies Treats (the “homestyle” ones) have mini marshmallows throughout. And corn syrup solids! And DATEM!

Okay, okay. Back to my recipe! It takes a heavy nod from Smitten Kitchen’s ‘salted brown butter crispy treat’ recipe in the form of BROWN BUTTER. Browning the butter adds such an amazing flavor note. It also makes your kitchen smell amazing. Actually, I’ll stop there to answer an important question…

What is brown butter?

Simply put, brown butter is the result of slowly heating butter past its melting point, allowing the water to evaporate and the milk solids to toast. The butter takes on an entirely new flavor during this process.

When heating butter you can actually see it enter various phases. After it melts, you may notice some foam that begins to form. And then the butter will seem to get clearer. And then a lovely, nutty aroma will fill your kitchen and you’ll be ready to dive in head first and live there. And then you’ll start to see little brown bits forming on the bottom of your pot. Those are toasted milk solids! Your butter will take on a golden hue and life will never be the same.

I love brown butter so much that I have an entire post dedicated to it: Brown Butter 101. There you’ll find tons of info on brown butter, including the science behind it, a step-by-step guide on how to make brown butter and even ideas on where to use it (cough everywhere.)

Ok, back to the development of this recipe! The Smitten recipe was my go-to for a while. It doubled(!!) the ‘original’ recipe’s butter, added a touch of salt to balance out the sweetness and had that beautiful, beautiful brown butter. However, despite how much I loved it, it was missing something.

Hopefully this list will make you a believer that this will be your finest batch of Rice Krispie Treats yet.

Disclaimer: As an Amazon Associate I earn from qualifying purchases.